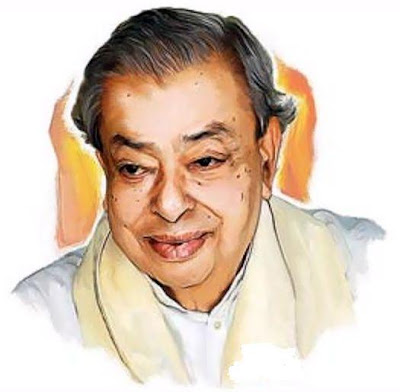 They always say what can one man do?
One man can do a lot if he dedicates himself to the task.
One man can create an AMUL.
– Dr. Verghese Kurien

Years ago I have traveled widely in the state of Gujarat. Anand town is on the State Highway between Baroda and Ahmedabad. It has a sleepy railway station on the Mumbai - Ahmedabad line. As you travel on the state highway you can see factories bearing sky-high legend AMUL. Whenever I used to travel on the route, my mind would inescapably remember Dr. Verghese Kurien. I had always regarded him as one of my ideals. I could never think of him without a sense of admiration. I had always longed to go into his office to meet him and shake hands at least once. The thought of ‘who am I for that?’ curbed my ambition.

Dr.Verghese Kurien was the one, over the last 63 years, who had built brick by brick the AMUL brand that is the face of the internationally famous, commercially successful empire that markets milk and milk products. The story goes back to the small town of Anand. AMUL stands for Anand Milk Union Limited. It is the name that showed the world how a single person with a will can eradicate the poverty of millions of people with a product that spoils in a matter of a few hours! It is a name that showed how the destiny of a nation can be rewritten for the better. Dr.Verghese Kurien is the only Indian who showed how it could be done!

Dr.Kurien was never the owner of or the investor in AMUL. AMUL is a miracle that happened when, as a Government employee, Dr.Kurien came forward to be a social entrepreneur. AMUL is among the most massive of the cooperative unions of people! It is an union of 16200 village cooperative units. Common people, all 32 lakhs of them, are the owners of AMUL! Today AMUL stands before the whole world as its greatest cooperative organisation that grosses a turnover of over Rs.12, 000 crores in milk and milk products.

There are few organisations in the world that can stand in comparison with AMUL in manufacturing breadth of products like our daily milk, butter, milk supplement for children, cheese, skimmed milk powder, curd, milk butter, ice cream, cold milk drinks, milk-based health drinks, sweetened milk concentrates, milk sweets, etc or in its geographic spread or its scale of operation. Dr.Kurien, as the head of National Dairy Development Board, launched Operation Flood to replicate the AMUL pattern of cooperative dairy development all over India. It is this ‘Operation Flood’ that made India the largest producer of liquid milk in the world! It is one of the few reasons that India could stand tall in the world as an example to the other nations! Dr.Kurien achieved all these as a Government employee on a monthly salary, taking all the monumental works in his stride as if it is all part of his every day work!

Variously called as the Father of India’s White Revolution, India’s Milkman and other such endearing names, Dr.Kurien had Malayalam as his mother tongue. He was born in 1921, as the scion of a rich family, in Kozhikkode, a part of Madras province in the pre-Independence India. He graduated in Physics from Loyola College of Chennai and later took a degree in Mechanical Engineering from Madras University. Later when he topped the exam in Metallurgy at Tata Steel’s College of Technology in Jamshedpur, Government of India sent him to America for further studies with a scholarship grant. He joined Michigan State University in 1946 and returned to India as a Mechanical Engineering scientist. He was to later remark that none of these achievements of him in higher studies was of any use in his later career!

While granting him scholarship for higher studies Government of India had laid the condition that on his return he must serve Government of India for a few years wherever he is posted in India. That was how he reached Anand in 1949. Anand was then direly impoverished with scorching summer and water famine and without any basic facilities. Dr.Kurien was sent there to erect new machinery for the Government milk dairy. Born with a silver spoon and having lived in America cocooned in all comforts, was given a dilapidated garage to stay in Anand. He could not stand the sounds and smells of cows and buffaloes tethered all around. He had an aversion for milk even as a child! Seeing no way out, he waited for his agreed term with Government to be over. In the meanwhile, he kept sending his resignations. Finally his resignation was accepted before the agreed term expired! As he was packing his bags with great relief, Tribhuvandas Patel, a leader of farmers in Gujarat, called on him.

Tribhuvandas Patel conveyed his belief forcefully that he could do something good for the dire poor who toiled night and day and yet could not eke out a living. He told him that Gujarat needed his service and exhorted him to stay. Dr.Kurien could not overlook the gravity and force of the request made by Tribhuvandas. That day he staked his life for the poor farmers of Gujarat. Thus the legend of Tribhuvandas and Verghese was born and the rest is the history of India’s White Revolution.

In one of his reminiscences down the road many years later Dr.Kurien had said: “Till then I knew nothing of either milk or agriculture. Only those people who are conscious of what they do not know rather than what they know can execute their work properly.” He requested his friend from his American stay, Harischandra Yadav, to come down to Anand for a few days. He hailed from a dairy farming family. The friend who came as a guest for three days stayed on for 35 years shouldering important responsibilities in AMUL. Dr.Kurien brought together many able persons from different fields and led them with a great clarity of purpose.

Dr.Kurien was not well versed in Gujarati language. His Hindi too was a laboured effort. English was his lingua franca. But that never cramped his style. Dr.Kurien’s contributions to the widely noticed and timely creative advertisements of AMUL were direct. Dr.Kurien’s stay at AMUL was a saga of achievements and awards after awards sought him out. Government of India conferred on him every honour it had except Bharat Ratna award. The award for being the World’s Top Manager (1993), highest award of the Milk Industry in the world, Walter Peace Prize, World Food Award and Magsaysay Award, he had got them all. In many of these awards, he was the only Indian to get them.

When his time of retirement came, he was not allowed to retire. He too was not the retiring kind. But at the ripe age of 85, Dr.Verghese Kurien was rather forcefully shown the gate at AMUL, the organisation he had so lovingly built. Political forces that wanted to clamp their hands on AMUL had cleverly outmaneuvered him. But even after this unseemly event he did not abandon either Anand or the many organisations that he had founded like the world-famous National Institute of Rural Development.

Selfishness was not a part of his mental vocabulary, but Dr.Verghese Kurien was supremely confident of himself, his work and decisions he made to further the cause of farmers. For this he was accused of being head-strong! He had always wanted all the Divisional Heads in AMUL to report to him directly so that he could guide them better. For this, he was dubbed a dictator. But never in his life was he a partisan giving concessions to favourites or recommending an individual. His work ethics, moving ahead of times with foresight, impartial and unbiased evaluation and unbending determination for the cause were the basis of his management legitimacy. The Presidents and Prime Ministers of India and Dignitaries from abroad threw protocol to the wind and visited him in Anand to gain the insights of his problem-solving philosophy.

This is what he has written in his autobiography An Unfinished Dream: “Farmer sheds his blood as sweat to produce food for us. When he eats his meal in peace, when he gets the respect and an income equivalent to other trades and industries, then alone will my dream be fulfilled. The journey that I started in Anand 60 years ago is not going to end till every poor farmer in our country triumphs.”

Dr.Verghese Kurien, who was a complete atheist and rationalist, wanted his body to be cremated in an electric crematorium and the ashes to be strewn on the soil of Anand. He also insisted that his funeral be free of the usual rites and that there be no memorial to his name. His wish was implicitly carried out after his death on 9th September, 2012. Dr.Kurien used to cite the following lines of Alfred Lord Tennyson whenever he talked of his own death

Sunset and evening star,
And one clear call for me!
And may there be no moaning of the bar,
When I put out to sea.
Posted by SHAJI at 8:01 AM