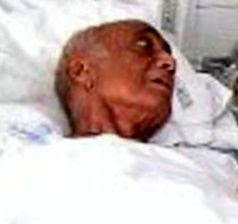 Ilaahi Aansoo Bhari Zindagi Kisi Ko Na De…
Khushi Ke Baad Gham-E Bekasi Kisi Ko Na De...
Oh god! Don’t give a life filled with tears to anyone..
Don’t give helplessness after happiness to anyone…
(Mehdi Hassan)
Mehdi Hassan is suffering from severe lung problems which may be the result of his continuous singing of a life time! He also suffers from neuro disorders resulting in disorientation.
It is said that he has got no money or source of income now! The eighty two year old Ghazal genius was unable to pay his hospital bills to a Karachi hospital to get discharged from there!

Though recordings and stage shows were his only source of income, he was never into heavy marketing of his music. He used to perform free many times.

Mehdi Hassan moved off from his music in late 90s after a paralytic stroke. His last stage singing took place in Kerala in November 2000, when he went there for an Ayurvedic treatment. A fan organisation in Mumbai had arranged a felicitation programme for him in December 2008 but it has been called off after the Mumbai terrorist attacks.

I am intolerably sad about the miserable condition of the greatest Ghazal singer ever lived on earth. Read my article on the music, life and times of Mehdi Hassan; The God of Ghazals.
Posted by SHAJI at 7:14 AM