The Magic of Salil Chowdhury 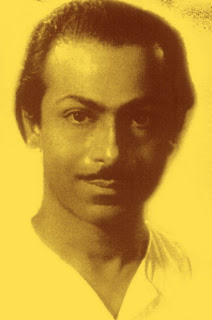 Born and brought up in a poverty stricken Kerala village of 1970’s, I set out to face life without much of a family background or social acceptance. There was a time when I was in the grip of severe loneliness, inferiority complex and lack of trust in human beings. It was the Malayalam film songs composed by Salil Chowdhury that inspired self confidence and the will to grow in me. Salilda’s music was very different from the music that I grew up with, one that my mind and ear was attuned to. That was its first attraction. It showed my soul a vast landscape with flowers, brooks and nice people all around. Salilda’s music was a vision to me that filled me with hopes and dreams of better tomorrows.

In the modern Bengali music Salil Chowdhury is regarded as the greatest influence after Rabindranath Tagore. From Lata Mangeshkar to Raj Kapoor, many greats of the filmdom have called him “A genius in film music for all times”. Music directors from Shankar Jaikishen to AR Rahman have been wonder struck by Salilda’s felicity in matching orchestration with varying emotions. He is the only frontline composer who has scored music in almost all the major Indian languages. In Bengali, he was a poet, lyricist, and story writer with exceptional abilities.

Salilda was born on 19th of November, 1925 in the village Kodhalia in 24 Parganas district of West Bengal. He spent his childhood in the tea gardens of Assam and was greatly influenced by the songs of the tea garden workers and Assamees folk songs. His father had a great collection of western classical music by Bach, Beethoven, Mozart and Chopin. Salilda’s love for western classical music taught him the potential of various musical Instruments and the importance of harmony in music. Even an ordinary song of Salilda attracts us because of the use of perfect harmony. The beauty of Salilda’s compositions lies in his adroit mix of Indian musical elements with western classical music.

When Salilda came to Calcutta for his graduate studies in 1944, he got attracted by the political ethos of the day and became a communist. He started writing songs and setting tunes for IPTA, the cultural wing of the communist party. The people’s desire for independence and awakening of the working class were the themes of those songs. Songs like ‘Bicharpoti’, ‘Runner’, ‘Abak protibhi’ were become the songs of hope and awakening for ever in the Bengali culture. The song ‘Gaayer bodhu’, which he composed at the age of 20, created a new wave in Bengali music. ‘Palkhir gaan’ created the next step up for modern Bengali music.

Salilda was a self taught musician and he never had any guru in music but his experiments in the composition and orchestration were something nobody had attempted till that date. He wrote the lyrics, he composed the music; he arranged, conducted and recorded them into a flawless ensemble of new musical expressions. To date no Indian film music director had exercised such total control and command over his medium.

His first Bengali film ‘Paribortan’ was released in 1949. ‘Mahabharati’ of 1994 was the last of his 41 Bengali films. When Bimal Roy made Salilda’s short story ‘Rickshawala’ as ‘Do bigha zameen’ in Hindi, Salilda entered Hindi filmdom as a music director. The exceptionally creative songs of that film, ‘Dharti kahe’ ‘Hariyala saawan’ and ‘Aaja ri aa’ attracted the attention of the entire nation.

After about 20 years in Bengali and Hindi, Salilda entered in to the Malayalam film music scene in 1964 with the film, ‘Chemmeen’. Even today, non- Malayalees identify Malayalam music with the songs of ‘Chemmeen’ like ‘Kadalinakkare ponore’. He scored music for 23 films in Malayalam, creating 106 precious of songs. Some of the Malayalam films with Salilda’s music never had their day in cinema halls and some were big box office flops. But all those films are purely referred to this day for the songs.

Malayalee lyricists struggled to write lyrics to his tunes with difficult phrasings and most often they wrote absurd lines. Many of his songs got even more absurdly picturised. Yet none of these could alienate Malayalees from his songs. His music, all on its own, conveyed the emotions even to the simplest of music lovers.

The flawless harmony with which Salilda used an array of musical instruments, suggests his unique understanding of a large number of musical instruments. Raj Kapoor once described Salilda as a genius who can play everything from Tabala to Sarod and Piano to Piccolo. Salilda showed Indian popular music, the way to use quaint western Instruments. The way he has used Oboe, French horn, Mandolin and Saxophone in his arrangements is simply unique.

Salilda’s music defers classifications and it never follows a predictable format. It stood by its sheer difference and within the framework of a film’s commercials compulsions but uncompromisingly creative. His songs charm the listener with the very first listening with an outward feel of simplicity. But it is only when you try to sing it; you realize the unusual musical twining and the complexity of the composition.

It is impossible to imagine his tunes without their accompaniments. The skillful use of obligato, the counter melody that flowing around the main melody, creating a pleasant intertwining is an unfailing attraction of his music. When saxophone, mandolin, oboe, chorus voices or a single voice chant the obligato in his score, we feel the captivating tonal magic of his music.

Most of Salilda’s tunes have repeatedly provided for songs in various Indian languages. The rain song of Bengali becomes night club song of a Malayalam. This becomes a sad song in Hindi. Salilda truly believed that the tune was the song. Listeners notice the tune first. His Malayalam songs were without the flavor of Malayalam. His Hindi songs never had the ‘khushboo’ of Hindi language. His songs were composed of emotions where music is the only language.

Salilda had to face the opposition of traditionalism. He was accused of westernizing the Bengali music. He countered, saying that Harmonium, the common idiom of Indian music, is itself a western instrument. “Music has to at all times, dissolve and evolve, ever renewing it into new forms to suit the tastes of the time. Otherwise it will become fossilized. But in my quest for moving forth, I should not forget my tradition”. This was Salilda’s own words about the basis of his music.

Composers like RD Burman and Ilayaraja moved in the trail blazed by him and in Malayalam Salilda’s assistants like R K Sekhar (A R Rahman’s father), K.J. Joy and Shyam succeeded in the path showed by him.

Music lovers of Tamilnadu too recognize Salil Chowdhury’s music of Malayalam films like ‘Chemmeen’. Kadalinakkare ponore’ is a song that held Tamilnadu too in a spell for over forty years. As in Kerala, often in many areas of costal Tamilnadu, “Chemmeen” songs are thought to be the traditional folk music of Kerala fishermen. Later scores for songs of many south Indian seashore films had the recognizable signature of these songs.

Background music of the film ‘Uyir’(1971), songs of ‘Karumbu’(1972, unreleased), ‘Paruva mazhai’, a Kamal Hassan film dubbed from Malayalam (1978) were the first scores of Salilda in Tamil. In 1979 Salilda composed the music for Balu Mahendra’s film ‘Azhiyaada Kolangal’. Songs like ‘Poo vannam pola nenjam’, ‘Naan ennum pozhudhu” became very famous. ‘Doorathu idi muzhakkam’ of 1980, was his last Tamil film. Five songs of this film became popular. But the song ‘Ullamellam thalladuthe’ can be said to be his best song in Tamil.

His contribution to Tamil appears to be so little but it is not an exaggeration to say that Salilda is truly the forerunner for today’s Tamil film music. Ilayaraja was introduced to the film industry as guitarist and combo organ player in Salilda’s recordings. Salilda’s influence on Ilayaraja is direct and evident. A good number of his songs follow Salilda’s style in totality and Ilayaraja had always admitted to being a great fan of Salilda. AR Rahman’s father R.K.Sekhar had worked with Salilda as an assistant. AR Rahman testified that, attending Salilda’s recording sessions with his father at a very young age, left indelible impressions in him.

Indian Music is based on raaga elaborations. This has impacted us for centuries and had become our cultural attribute. In this milieu, Salilda introduced to us the developed orchestration of western classical music. He created a new genre of harmonized music with the blend of Indian and western elements.

Salilda passed away on the 5th of September, 1995 but for millions of music lovers all over the world, he will always be known for his beautifully and sensitively created songs. And for me, being one among them, Salilda lives on and converse through his immortal music.
Listen to a rare gem of Salilda
Ab Aur Na Kuchch Bhi Yaad Raha
Posted by SHAJI at 11:00 AM