Mehdi Hassan; The God of Ghazals 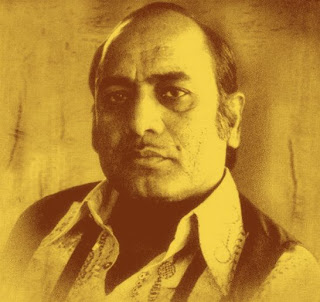 In 1993, I was selling music as the Sales Manager of a frontline music label. Indian film songs, devotional songs, imported music from Warner brothers, Indian classical, Indi pop, Instrumentals, Ghazals… We sold them all.


It was a golden period of music market. Almost everything was a sell out. There was no free music downloading from internet. The word mp3 was unheard. The technology of burning a thousand songs in to a CD to burn down the music industry has not arrived! CD technology itself was a budding notion. Audio cassettes ruled the scene. Our stock rooms always had the welcome fragrance of fresh harvests.


We had the distribution rights of some music collections from Pakistan and most of them were Ghazals. As an occasional listener of Ghazals I had heard Ghulam Ali, Jagjit Singh and Hariharan but Ghazals were not exactly in my list of favorites. My friend and playback singer Srinivas was already a Ghazal addict. He introduced me to Mehdi Hassan and swore that there is no other Ghazal singer in the entire world like Mehdi Hassan.


The name Mehdi Hassan was there on our bill of goods. On the stack of cassettes I saw that name and an aged smiling face. I took one tape of Ghazals sung by Mehdi Hassan for Pakistani films. It will not be an exaggeration to say that it changed my very approach to music listening. Along with the Western Classical, Western Oldies, Vintage Indian film music and the music of Salil Chowdhury, Mehdi Hassan entered into my world of music listening for all times to come. Like the countless addicts of Mehdi Hassan, I was enmeshed in the drunken bliss of Mehdi Hassan Ghazals.


I think it is impossible to just 'hear' Mehdi Hassan. Something much superior is needed to absorb his music. The musical silence in his rendering is so compelling that mere ears cannot perceive them or experience them. His singing opens a vast ocean of pain and passion deep inside the listener and it reveals the collective agony of all the heart broken lovers. His is not just another human voice. It is the constant singing of agony and triumph. It sings sacrifice and redemption. It proposes sacred faith in the victory of pure love and challenges fate and mortality. It is an eternal experience.


Mehdi Hassan is the most complete Ghazal singer ever. His deep husky voice is a moving experience for his listeners. The way he enlivens his Ghazals with the depth of emotions stamps his class. He can render all the subtleties of classical music in his uniquely authoritative manner. He can sketch and elaborate with ease the innate beauty and nuances of every raga. He can present the most delicate melodic patterns with extreme command. But the relaxed and assured style of Ghazal rendering with an unparalleled feel is what makes him the ‘Badshah’ of Ghazals. He has set such towering standards in Ghazal singing which is extremely difficult to follow by other artistes.


Mehdi Hassan’s first public performance was at the age of eight. Since then came nearly 25,000 songs. He outgrew the frontiers of Pakistan to command a worldwide audience. With Mehdi Hassan Ghazal took a new form. Ghazal became unthinkable without thinking of Mehdi Hassan.


There is no better art form than Ghazals to combine music and literature. Ghazal is at once one of the richest forms of Urdu literature and an experience that enthralls our ears and intellect. Of Persian origin, Ghazal entered India during sultanate rule in 12th century. Amir Khusrau (1253-1324) who served as Alauddin khilji’s minister, poet laureate and historian of his court was pre-eminent in fostering Ghazal. Between 18th and 19th centuries, Urdu became the preferred language of poetry and culture in India.


Poets such as Sauda, Mir Taqi Mir, Zauq, and Mirza Ghalib penned Ghazals which are considered till date as hallmarks of Urdu poetry. Gradually Ghazals started to be expressed through music. In 20th century Ustad Mauzuddin Khan and Gauhar Jan were the early pioneers of Ghazal. Later, vocalists like Ustad Barkat Ali Khan, Mukhtar Begum and Begum Akhtar established themselves as major exponents of Ghazal. Mehdi Hassan has added further dimensions to this great musical art form.


Mehdi Hassan was born in 1927 in a hamlet named Luna in Rajasthan. His was a family of traditional musicians. He claims to be the 16th generation of hereditary musicians hailing from the Kalawant clan. Mehdi Hassan had his early musical grooming from his father Ustad Azeem Khan and uncle Ustad Ismail Khan who were traditional Dhrupad singers.


Mehdi Hassan had no formal schooling. His education was solely of classical music. After the India-Pakistan partition his family migrated to Pakistan. There he experienced extreme poverty. Starting as an odd job boy in a bicycle shop he later became a car and tractor mechanic. Despite the hardships, he continued the music practice and in 1952 he got an opportunity to render a thumri on radio Pakistan. That changed his life. He secured recognition within the musical fraternity. He was deeply devoted to Urdu poetry and started to experiment by singing them as Ghazals.


Mehdi Hassan's style of Ghazal rendering incorporates the subtle elements of both Dhrupad and Khayal styles of Hindustani classical. He enriched his Ghazals by using various techniques of classical music and above all a touch of Rajasthani folk music. Before Mehdi Hassan many classical singers had sidelined Ghazal as an inferior form. He reformed Ghazal into a major melodic genre which sits on an equal footing with thumri and dadra. Another important feature of his style is the accurate pronunciation. Whatever be the compulsions of the composition, he valued the importance of enunciating the lyrics right.


How the lines of Mehdi Hassan Ghazals spring to mind! ‘Baat Karni mujhey mushkil’ in Raag Pahadi, ‘Gulon mein rang bharey’ in Raag Jhinjhoti , ‘Shola tha jal bujha hoon’ in Raag Kirwani… once listened they always stay with you as the depth and ‘dardh’ of his voice..


Mehdi Hassan was one of the most popular playback singers of Pakistani films. Many of his Ghazals from films became classics. ‘Zindagi mein to sabhi’ (1971) the eternal ‘Ranjish hi sahi’ (1971), ‘Mujhe tum nazar se’ from Doraha (1967) etc. are such Ghazals first released through films. He has won most of the awards for music and culture in Pakistan including the life time achievement award of Pakistan Broadcasting Corporation. He has toured worldwide and performed countless concerts and mehfils. His released last album Sada-e-Ishq is important not only for some great Ghazals but also because it may be the farewell album of this great musician.


Mehdi Hassan moved off from singing in late 90s after a paralytic stroke. His last stage singing took place in Kerala in November 2000, when he went there for an Ayurvedic treatment. A fan organisation in Mumbai had arranged a felicitation programme for him in December 2008 but it has been called off after the Mumbai terrorist attacks.

For many years Mehdi Hassan was suffering from severe lung problems which may be the result of his continuous singing of a life time! He also suffered from neuro disorders resulting in disorientation.

It is said that he had no money or source of income in his autumn years! Three years ago it was said that the eighty two year old Ghazal king was unable to pay his hospital bills to a Karachi hospital to get discharged from there! Though recordings and stage shows were his only source of income, he was never into high marketing of his music. He used to even perform free many times. I was intolerably sad about this misery of the greatest Ghazal singer ever lived on earth.


On the 13th of June 2012, Mehdi Hassan breathed his last in Karachi Hospital at the age of 85. Lata Mangeshkar once famously said “God sings in Mehdi Saahib’s voice". But for millions of his admirers like me, he is The God of Ghazals, the god who came down to earth with tears and dreams as his voice and singing.