Can We Forget Malaysia Vasudevan? - Written for India Today 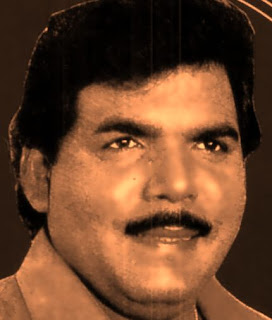 It was past midnight. A friends’ gathering was on in the front lawn of a farm house in the foot hills of Tiruvannamalai. My writer friend Bava Chelladurai suddenly suggested to me that we speak a few words to honour the memory of Malaysia Vasudevan who had passed away three days back. For a moment I was left groping for words and unable to make up my mind on what to say.
Was I to speak of his naturally unique singing? Should I speak of the long relationship that I had with many of his songs? Was I to speak of those few but rare film songs which he had composed himself? Or better still, was I to speak of his innocent and child-like character? Above all, was I to express the pain I felt by telling how I missed meeting him one last time in spite of being in regular touch with him?
He had rendered over five thousand songs. He had acted in over eighty five films. He was for many years a super star singer of Tamil film music. But he had been living these last many years totally ignored and forgotten.
Changes in the Tamil cinema world towards the end of eighties left him with diminishing singing opportunities. He did not have acting assignments to speak of either. As his finances declined he produced the film Nee Sirithal Deepavali. The film was a total disaster. He lost everything including his bungalow. He never recovered from this loss.
In 2003 he suffered a stroke that left him paralysed on one side. He lost his ability to speak. He had to stay in the Intensive Care Unit for months together. Neither the film industry that he served for three decades nor the beneficiaries of his generosity cared for him. The towering personality that Malaysia Vasudevan was, lost in oblivion.
Continued treatment and exercise therapy restored his speech and walking with some difficulty. But he could not sing a single line. What can be more sorrowful to a person who had dedicated his entire life to music? He could have achieved a complete recovery with more and better medical treatment. But he did not have the money for it. And nobody came forward to help him.
The article that I wrote on him a few months back produced many reactions. Many who read the article regretted their ignorance in not recognizing his genius all this while. Director Maniratnam, who attended the function to release my book on 18th September of 2010, honoured Malaysia Vasudevan there. This was followed up by other articles and interviews about him in many Tamil and English magazines. When Malaysia Vasudevan had come for the cremation of the singer Swarnalatha, media people mobbed him as though he were a popular contemporary star. He felt consoled by such small recognitions that came after 20 years of neglect. But apart from the fan mail and phone calls that he received from those who admired his singing, he did not receive any material help that could make a difference.
I think he had lost all hopes in life after living many years of sorrow-filled life that was both physically and emotionally draining. At last on 20th February 2011, Malaysia Vasudevan was permanently released from all the vexing difficulties of his mortal life.
The master composers, super star actors and star singers who hastened to pay their final respects moments after his death were people who had ignored him during the many years that he struggled to live. Malaysia Vasudevan had expected nothing more than a courteous telephone call or a cordial meeting from them.
As I concluded my brief account in memory of the natural most singer Tamil film music ever had, film director Mishkin who was there affirmed that Malaysia Vasudevan was the only true Tamil singer to emerge after T.M.S. He began to sing ‘Poongaatru Thirumbuma Yaen Patte Virumbuma’. The haunting song of Malaysia Vasudevan appeared to resound everywhere in the deep silence of that late night.
Posted by SHAJI at 6:42 AM