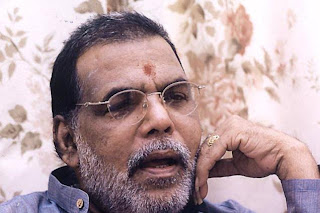 One day I received a phone call from Vasu Anna. “I am Vasu speaking. Where are you? Is everything okay? Please do come here if you are free.” I told him that I was leaving station and that I will be back after ten days. He wished me a happy journey and bade me to come back in good health. I assured him that I would come and see him on my return. But he had left for that unknown world everyone should ultimately go to, on the same day that I came back. Where should I go to meet him now?

I have always been a steadfast fan of the marvelously natural singing of Malaysia Vasudevan. Without an iota of doubt I will assert that he was the greatest singer of his time. There were plenty of reactions to an article that I wrote on him a few months ago. Many who read the article regretted their ignorance in not recognizing his genius all this while.

In an interview with Ananda Vikatan that followed my article, Malaysia Vasudevan had spoken that he had been living for many years with failing health and much mental agony, totally ignored by all those who had known him in a three-decade-long career. A.R.Rahman had e-mailed to me that he had learned of Malaysia Vasudevan’s dire health and financial conditions and that it was Malaysia Vasudevan who had first identified his talent and helped him with the opportunity of his first music album!

This was followed up by many English and Tamil periodicals with their own write-ups on him. It also happened that Director Maniratnam honoured him at a function held for the release of my book on 18th September, 2010. When Malaysia Vasudevan had come for the cremation of the singer Swarnalatha, media people mobbed him as though he were a popular contemporary star. I think he felt consoled by such small recognitions that came after 20 years of rejection and neglect.

He had once told me: “I had not expected anything from anybody. I had never expected that I should get an opportunity by denying it to others. I arrived in India from Malaysia with a dream of singing just one or two songs in films. But I have already sung more or less five thousand songs. I have even acted in over 85 films. Success, fame and wealth, I have seen them all.” In 2003 he suffered a stroke that left him paralysed on one side. He lost his ability to speak and walk. He had to stay in the Intensive Care Unit for months together. In the film industry that he served for three decades there was not a single voice of support. None of the beneficiaries of his generosity came forward to enquire after him. The towering personality of Malaysia Vasudevan was lost in oblivion.

Continued treatment and exercise therapy restored speech and ability to walk with some difficulty. But he could not sing a single line. What can be more sorrowful to a person who had dedicated his entire life to music? He could have achieved a complete recovery with more and better medical treatment. But he did not have the money for it. And nobody came forward to help him. But his memory remained undimmed by the stroke and its after-effects. He remembered almost every song he had sung. He remembered even the smallest details of his life. I think that it was this phenomenal memory serving as a backdrop to the neglect by people he thought were friends and colleagues that tormented him.

When I called to greet him on the occasion of last Deepavali, he was bitter as he said: “What Deepavali? Life is now a complete vacuum.” Immediately after his death masters of music and superstar actors who lip-synched to his songs rushed in an unseemly melee to pay their ‘last respects’ to him! They were the same persons who totally set their faces against him for the last two decades. He had expected nothing more than an occasional casual meet or a kind word over the telephone from them.

Malaysia Vasudevan was a great singer who rendered his songs in wondrous ways without exaggerated emotions and with a total passion for music. He is a marvel of music that ought to have been celebrated at all times by our people so steeped in the culture of listening film songs at every turn. But we never celebrated him when he was alive.

He once told me “Nobody has anything big enough to be overly proud of in this life”. I did not pay my ‘last respects’ to his body nor did I attend his cremation. I did not have the heart to see his lifeless body. He will always fill my heart with his child-like smile and talk. His marvelously rendered songs will soothe me like the summer breeze in my moments of sorrow. I only have a silent tear to place at the feet of my dearly loved Vasu Anna.